Life from a Spanish Perspective


My experience in Spain was an amazing one. I learned about another culture that I really loved, as well as a lot about my own life here. Having never had a long visit (more than a week) to another country and not having another culture as part of my family life in America, my life and culture in America was the standard I had for how life was. By being able to visit another country for such a long period of time, I was able to see a whole new way of life and mindset that other people have, which really helped me understand the way of life in America better as well. Going to Spain, I didn’t really have any cultural shock despite it being so different from my American life. I really loved it there. Because of this, I was surprised to have a bit of reverse culture shock when returning to America. By experiencing another culture, I also was able to better understand parts of American life that had been normal before. In this way, Spain really opened my eyes up to a new way of life and how much someone’s environment (like a culture) can impact them. I also think I really found a love of traveling through my trip, and even think I would really like to live in another country one day. Another thing that surprised me was how close neighbors are in Spain (at least in the neighborhood I stayed in). In America, it does seem like neighbors can be quite close, however, in my neighborhoods in Spain it seemed like the people my host family would hang out with on a daily basis were their neighbors, and they would regularly walk to each other’s houses. 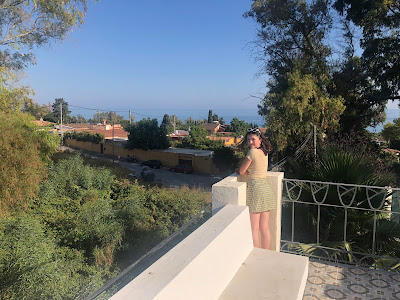 Another thing that surprised me was how much Spanish I actually knew! I had been learning Spanish at my school for five years, but I was really worried about not being able to communicate with my host family because I thought my Spanish was bad beforehand. However, once actually talking for a few days in Spanish I realized that my vocabulary was a lot bigger than I thought. My host family also got pretty good at describing or acting out words I didn’t know. There were also a good amount of colloquial words/slang that they used a lot, like ‘vale’ or ‘flipa’ that were pretty necessary to learn since they used them a lot. I also got way better at Spanish after my trip, I think I learned more there than I could have learned in a classroom. Things like understanding people talking fast, speaking with a better accent, and slang words are examples of things that would have been difficult to learn in a classroom.

A normal day at their house would be sleeping in, maybe baking a cake (bizcocho) for breakfast, making and eating lunch, hanging out with their neighbors/friends in the afternoon, maybe taking a nap, then eating dinner at like 10. I was really lucky with my family because they took two vacations to two different southern coastal cities in Spain while I was there: one to Marbella and one to Alicante. Because of this, I didn’t end up staying at their house for that many nights, maybe 5-7 nights total. When on vacation, we would sleep in, have espresso and toast for breakfast, go to the pool or beach, have a big lunch(we had paella like 4 times), take a shower or nap, then go to the city to walk around and get dinner from like 9-11. 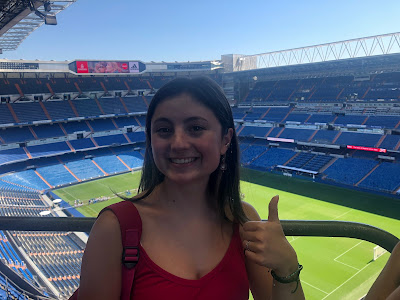 One thing I was a bit worried about before going to Spain was food since I’m a vegetarian, but they had vegetarian food at almost every meal. Some of my favorites were papas bravas (like french fries with salsa), tortilla (an omelet with potato), churros, and croquetas (which normally have meat but once I had some mushroom ones). I also really liked paella, which has seafood which I picked out. They also always had salad and bread at every meal, so there was always something to eat.

Overall, I really loved my trip to Spain and am so glad I went! I would recommend it to anyone who wants a new cultural experience, wants to have fun, or wants their Spanish to improve!

December 15, 2014
Many of our programs allow you to choose your own program dates, flights, and length. Some advantages to this are that families have control over booking flights and are able to use frequent flyer miles. One challenge, however, is that students must travel independently to their program destinations. Some teens are understandably nervous about flying alone.  Here are some tips to help teens and parents feel more at ease about traveling internationally without a chaperone or flight leader. Before booking your ticket Check with us before booking your ticket to see if anyone else from your area will be attending your program at the same time. We can put you in contact with one another. Booking your ticket Whenever possible, choose a direct flight. Fewer fights mean fewer opportunities for flights to be delayed or for other problems to arise. If a direct fight is not possible, choose a flight that stops or makes connections in the United States. Whenever possible, stick with t
23 comments
Read more

February 03, 2015
By Elizabeth Markleson, host mom You could say I'm a relaxed housekeeper. Our kitchen table is covered with piles of papers "to be dealt with later", our sink is often full of dishes, and you can be sure there is a whole family of dust bunnies living under the furniture. When my kids were little and they would see me go into my cleaning mode, they would always ask, "Who is coming to visit?" Not much changes over the years! When it comes to housework, a guest is a great motivator. The days were ticking down before our Spanish student arrived and my to-do list was getting longer and longer. “Don’t stress too much about it,” my sister said. “Isn’t your student just supposed to blend into your family as it is? This is an exchange student, not a visiting dignitary, after all.” True, but I am a strong believer in the power of first impressions. When my daughter went to Spain a few years ago, her host family added some really nice touches to make her feel welcome..
2 comments
Read more