There I was, standing at the counter of a small cafe in the Paris Airport. I was hungry and tired after flying halfway across the world, yet somehow I was supposed to order a sandwich. In French. I had spent the last 3 years learning French in a classroom, but this was my first chance of putting it to practical use. Nerves overcame me but I pushed them aside, thinking to myself there was no chance of me seeing these people ever again in my life. I was the first one to step forward and order my sandwich. I stumbled over the words, but felt so victorious when they understood me and I actually understood what they said back! This was just my introduction to my wonderful trip. Of course there were ups and downs, like when I met my host family and had no clue what they said to me (turns out they told me my suitcase was heavy). Even when I didn’t understand what was being said or what was going on, I still enjoyed every moment because I got to learn something first hand. 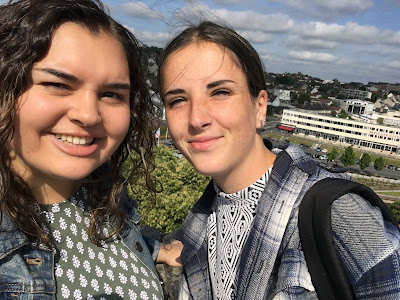 One of my favorite days was when my host family and I went to visit relatives of my host mom, Nelly. Nelly’s sister took me, Nelly, and my host sister, Suzon, to a small town on the coast called Granville. It was one of the prettiest towns I have ever been to. Half the town was at sea level with a beach, and the other half was a little higher with gorgeous views of the ocean. In Granville was also the Christian Dior museum. The museum is actually Dior’s old house, and there was an exhibit on Grace Kelly when we went. There were gorgeous dresses and outfits that Kelly had worn when she was alive. The best part of the museum was the garden outside. There were tons of pink roses framed with a backdrop of the Atlantic. I also really enjoyed getting to know Nelly’s sister. She had done an exchange trip to the US when she was my age, and liked to practice her English. When I couldn’t understand what was being said at family dinners, she would tell me in English. 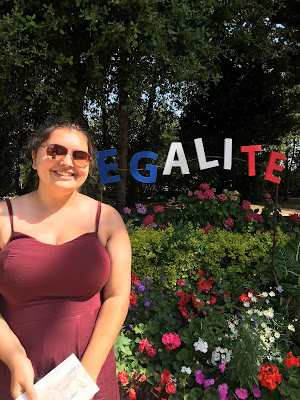 Another thing that I really enjoyed was just spending time with my host sister, Suzon, and her friends in the city. The city where my host family lived not very large, with only around 30,000 inhabitants. The downtown area was very small, but cute with several shops and restaurants. Suzon and her friends would hang out by the river for the most part, and they would always be playing music. Sometimes Suzon and I would go to this restaurant with outdoor seating and we would order drinks. We always got something called a “diablo.” From what I could tell, a diablo was like an italian soda without cream. It came in many of the flavors I was used to, but it also came in violet flavor. I actually found that violet flavor was super common in candy or drinks. 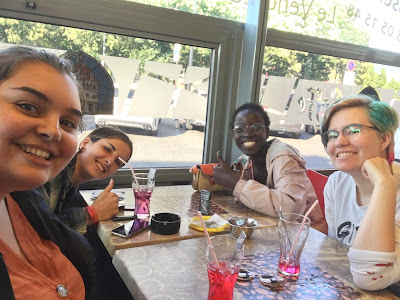 That was just one small thing of the many I learned. I learned that you could actually swim in the ocean there without freezing. I learned that all the houses in France have the blinds on the outside of the window instead of inside. I learned that I do not like mussels. I learned that it’s really hard to find baking soda in the grocery store. But my biggest takeaway from the trip was to keep an open mind about everything. I wouldn’t have learned as much as I did unless I was willing to try the weird food or do something I had never before. I think everyone should spend some time away from the comfort of their own country and language, because it really helps you understand where people in your own country who didn’t learn English as their first language and never grew up in the culture here are coming from in their world view. This was a very valuable experience for me that I will never forget.